By Nadav Soferman Jan 17, 2013
Modifying an image opacity so the image is semi-transparent is a common requirement when implementing modern graphics design. Reducing image opacity allows background images to feel less dominant. Reducing opacity also allows layering of multiple images one on top of the other, an important step when adding watermarks, badges and textual overlays to images.
Modern web browsers support opacity manipulation via CSS directives. This however does not solve the problem completely. Watermarks need to be embedded as part of the original image and can't be added on the client's side. In addition, manipulating the opacity of the image itself allows for a consistent view across all your service's mediums - website, mobile application, emails (notifications) and PDFs (reports). Emails in particular do not support many of the modern CSS directives.
In this blog post we wanted to show how you can use Cloudinary's cloud-based image transformations to easily manipulate the opacity of images and how to use this technique to add watermarks to images.

Let's look at the following image the was uploaded to the cloud using the 'mountain' public ID. 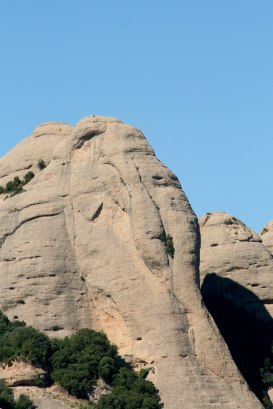 You might want to use an image like the one above as a background image for a section of your web or mobile application. Simply set the 'opacity' parameter (or 'o' for URLs) to the desired percentage and Cloudinary will automatically modify the opacity of the image on-the-fly. As always, the resulting image is stored persistently in the cloud  and delivered optimized and cached to your worldwide users through a fast CDN.
The following example reduced the mountain image opacity to 20%. Now you can safely place text and other graphical elements above this image.
https://res.cloudinary.com/demo/image/upload/o_20/mountain.jpg
Below are examples of generating a transformation URL with modified opacity using our client libraries for Rails, PHP, Django and Node.js:
Copy to clipboard
Copy to clipboard
Copy to clipboard
Copy to clipboard

Another common graphic design practice is to display a list of logos of customers and partners in your web site. Instead of the original, colorful logos, many web designers prefer to display semi-transparent grayed versions of these logos so they don't take attention from the website's messaging.
With Cloudinary you can dynamically gray out images, and easily modify them in case your graphic designer has a change of heart.
In the following example, we've uploaded multiple logos to Cloudinary. We've went further and used Cloudinary's sprite-generation capabilities to merge these logos into a single sprite image for better performance:
.../image/sprite/w_160,h_60,c_fit/logo.png
By simply setting the 'effect' parameter (or 'e' for URLs) to 'grayscale' and setting the 'opacity' parameter ('o' for URLs), Cloudinary generates a semi-transparent gray-scale version of the logos for embedding in your website:
.../image/sprite/w_160,h_60,c_fit,e_grayscale,o_50/logo.png

In a previous blog post, we've shown how you can easily add overlays to images. Such overlays could be used to add watermarks to images using a previously uploaded semi-transparent PNG image of such watermark. With the new opacity manipulation transformation, you can file upload your non-transparent watermark image and manipulate its opacity dynamically to make it semi-transparent, ready for adding as a watermark overlay.
The following example adds the previously uploaded image 'cloudinary_icon' as a 200 pixels wide overlay above the mountain image:
.../image/upload/l_cloudinary_icon,w_200/mountain.jpg
Now, by setting opacity to 40%, the overlay becomes semi transparent:
.../image/upload/l_cloudinary_icon,w_200,o_40/mountain.jpg
You can also apply an effect or filter on the overlay. In the following example we've increased the brightness of the overlay to make it white and reduced opacity to 30%:
.../image/upload/l_cloudinary_icon,w_200,o_30,e_brightness:200/mountain.jpg
The code samples below detail how to build the same URL in Ruby, PHP, Django and Node.js:
Copy to clipboard
Copy to clipboard
Copy to clipboard
Copy to clipboard

Dynamic opacity manipulation and watermark generation are some of the newest Cloudinary capabilities in your image manipulation tool-belt. These capabilities further simplify your web and mobile applications tedious image management tasks.
With a simple URL (or one line of code) you can generate images that match your ever evolving graphic requirements and deliver them quickly to your users. You don't have to deal with complex non-standard CSS directives and you don't have to use over-qualified graphical software like Photoshop to generate images in your desired color balance and opacity.
Please share your thoughts and let us know how we can further improve Cloudinary's growing feature set.
Use Cloudinary to transform, optimize
and manage your images and videos sign up for free

Over the past 15 years, the video industry has undergone a significant change in video formats on the web. In particular, in the early 2010s, the 3GP format, which the 3rd Generation Partnership Project (3GPP) created for 3G-enabled mobile devices, went nearly extinct. The advancement of mobile devices and cellular networks has brought about the need for pioneers to build better formats for a faster user experience.

We’re excited to announce Cloudinary’s integration with SAP Commerce Cloud, through which the latter’s customers can significantly boost the visual media experience on their website or app.

As critical as it is to engage with shoppers in order to succeed in e-commerce, old-style, boring emails are far from being effective. In fact, they tend to be annoying because no one likes to read formulaic, generic messages that are sent en masse. For better results, rethink your email marketing campaigns and try out creative strategies.

The bane of our existence is the lack of efficient ways for tackling the plethora of recurring tasks in our lives. One of those tasks is surfing the internet. We consume a lot of web content daily, of which a large percentage are images and videos. We’re constantly quickly scrolling through 30-second videos or checking out pictures of cute items we’d like to buy in our free time.

Building a Roommate-Matching App With Cloudinary and Jamstack

Roommate matching can be a pain—especially during the COVID pandemic when people don't want to meet in person. Matching apps like Flatmates, Roomster, and roommates.com are helpful, and if you're in the roommate-matching space, you know that great video is essential for those seeking roommates. Fortunately, Cloudinary can help.

Imagery and video are proven ways to promote engagement and conversion on e-commerce sites. One study found that 75% of online shoppers say that product pictures are “very influential” for their purchase decisions, with a respondent commenting, “If I can’t see it, I can’t make a decision about it.”

Cloudinary is a cloud-based service that provides an end-to-end image and video management solution including uploads, storage, manipulations, optimizations and delivery.