No programmer could imagine a world without variables. Neither can Cloudinary. That’s why Cloudinary now offers image transformations that support user-defined variables.

Using Cloudinary, you can already deliver transformed images with a variety of transformations, including resizing, cropping, rotating, a huge toolbox of special effects and filters, text and image overlays, and more, all of which you can deliver responsively, on-the-fly, and optimized for quick delivery via CDN.

But there are many scenarios when you may want to set up a fixed set of transformations to be applied to a variety of media assets, with one or a few variations depending on the specific image to be delivered, or on other factors that are determined at a later time.

By including user-defined variables in your transformations, you can assign different values to specific elements of the transformation when you deliver the file. For example, you could:

You can also now apply arithmetic operators to numeric parameters or user-defined variables representing numeric parameters. To make it more interesting, your user-defined variables can even take on the value of an already known parameter value adjusted by some arithmetic expression. For example, you could assign the textwidth variable to be equal to the width of the image minus 10. Then you could create a text overlay whose width is assigned the value of the textwidth variable.

In general, to include a user-defined variable in your transformation, you just specify any variable name of your choice preceded by the $ sign, instead of a static parameter value, and you assign values to your variable similar to the way you would for a regular parameter.

This is all it takes to create a basic user-defined variable for a numeric parameter: 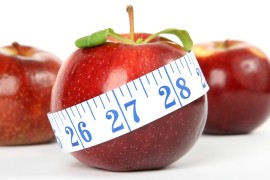 As you can see in this simplified example, we created a user-defined variable named imgwidth, initialized it with the value 270, and then later assigned the imgwidth variable to the width parameter.

You use variables for string parameters in a similar way, but you bound the string value with ! ! characters in the assignment, for example, !MyStringValue!.

For example, have a look at this basket of strings. There are several transformations, but the value of the effect gets a different string value in each case, controlled by a variable:

Below, we show how to deliver the sepia image on the right: we assign the !sepia! string to the $effect variable, and then we set the effect transformation parameter to use whatever value is in the $effect parameter:

To simplify the examples above, we demonstrated assigning variable values and using the variables within transformations, together in the same delivery URL.

This separation takes named transformations to a whole new level, making it significantly easier to reuse common transformations for many images, even when some specific adjustments must be made to the transformation depending on the specific image, the location where the image is displayed, or other dependencies.

Now that you’ve got the idea, let’s take a look at some more cool stuff you can achieve with variables. 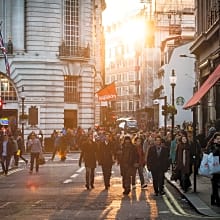 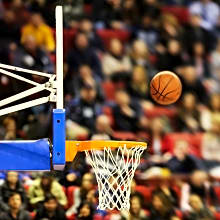 You could create a named transformation that sets the quality, crop type, gravity, and other image improvements, and additionally sets both the width and height to a $size variable that will be defined externally. For example, the t_news_square named transformation might be defined as: c_fill,e_improve,g_auto:faces,z_0.7,q_auto,w_$size,h_$size,

The delivery URLs for the large image thumbnails would set the $size variable to a value of 220:

Imagine that users upload a profile photo to your social media app and you need to display the photo on their profile page as a portrait-oriented rectangle with rounded corners, on their homepage as a square, and as a small circular chat head on the chat page. The zooming on each photo should adjust according to the size and shape of the image. And of course you know that as your site design changes in the future, these values might change.

But regardless of the above adjustments, you always want to use the same quality, format, and face recognition settings for all photos.

With variables, you simply create a named transformation (called profile_pic in our example) with static settings for the permanent elements, and variables for the size (aspect ratio & final width) and the radius (rounding):

This named transformation takes advantage of arithmetic operators (subtraction in this case) to achieve a zoom that changes with the aspect ratio. Thus the 1:1 images (aspect ratio = 1) end up with a closer zoom, achieving a headshot, but not too close, while portrait images (aspect ratio < 1) have a smaller zoom, and thus show more of the whole body.

The round chat head picture shown above on the right would be delivered with a value of 1.0 for $aratio, 75 for $width, and 20 for $rounding:

Let’s say you want to post the winners of a photo contest. The winning photos are delivered with a banner graphic overlay displaying the name of the winner and the place that he or she won. You want to post all photos at their original size, but both the width of the banner overlay and total width of the text (regardless of the length of the winners’ names) must be relative to the size of the photo.

You can accomplish this by creating user-defined variables for all the varying elements along with arithmetic operators and relative values. For example, we want the banner to be 90% of the photo’s width and 15% of it’s height. The text fits well on the banner when it’s about 45% of the total image width, but the distance of the text from the bottom of the image has to be relative to the height of the resized banner. Of course we want the winner’s name and where they placed, to be variables as well.

The transformation that achieves all this is somewhat complex, but that’s OK. We just need to work it out once and then put it into a named transformation.

So the delivery of each winning photo is a snap!

For example, all we have to do to deliver the first place photo is set the $name variable to “Jen Fine” and the $award variable to “First”:

Change is the only constant

“Change is the only constant.” The phrase was coined by Greek philosophers over 2500 years ago, but it has never been truer than it is today. With the supersonic pace of Web technology development and non-stop improvements and new directions in UI design, having static values anywhere can be a hinderance.

But static values no longer need to weigh down your image transformation code. Take advantage of user-defined variables in named transformations to enable quick and flexible adjustments while maximizing code reuse and consistency across a variety of media assets.

This article demonstrated a bunch of ideas to get you started with user-defined variable transformations, but the sky’s the limit. User-defined variables are supported with all Cloudinary plans, including the free one, so if you don’t have a Cloudinary account yet, take a few seconds to get a free account now, and show us what you’ve got!

Packed with unique insights, pro tips, and customer stories, our fourth annual State of Visual Media report is here to help you and your brand thrive in today’s visual economy. For this year’s report, our data science team analyzed more than 219 billion transactions per month generated by 375 of…